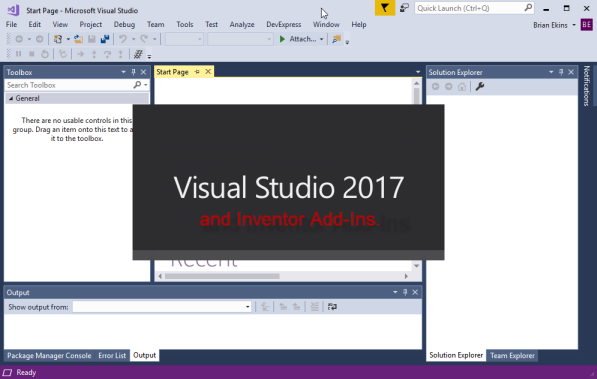 A few weeks ago I started a new add-in and ran into a couple of problems.  The issue is that I’m using Visual Studio 2017 and Inventor 2019.

There are three ways to work around this problem.

To quickly work around the missing VS150COMNTOOLS, I manually added the environment variable, but it was still failing and then I found out that the vsvars32.bat utility is no longer provided.  A substitute that will work in this case is VsDevCmd.bat.  So the post-build steps become:

Finally, to follow the spirit of the new Side-By-Side install capabilities of Visual Studio, it’s best not to add the environment variable but instead to use the “Developer Command Prompt for VS 2017”, as shown below.  You will probably want to add this to your Favorites list in the Start menu to make it easier to get to. 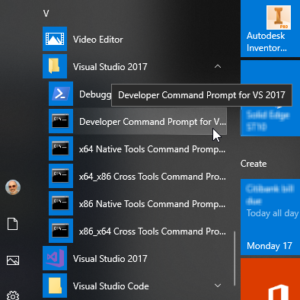 Running the “Developer Command Prompt” will open a command prompt window like the one shown below.  As part of opening this window, the standard variables have been set up, including VS150COMNTOOLS.  You can start Visual Studio from here and then everything will work as expected.  You start Visual Studio by executing devenv, as shown below.

Hopefully, this information gets you quickly past these issues and onto developing your add-in.

Update: After working with this for a bit I’m having second thoughts about the suggestion of starting Visual Studio from the “Developer Command Prompt”.  I frequently browse and open projects form Explorer and they don’t get the correct paths defined because Visual Studio isn’t being opened in the correct environment.  So I’ve gone ahead and added an environment variable.  I moved to Windows 10 fairly recently so if you’re in the same boat, here are the steps I followed to add the environment variable.